The Publicist went down to La Jolla weekend before last.  This is some of what she saw: 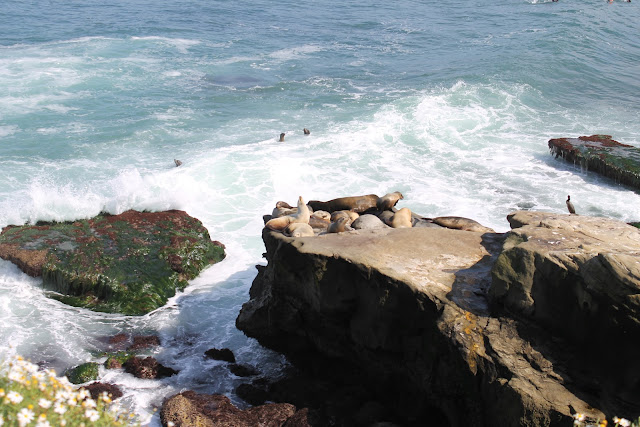 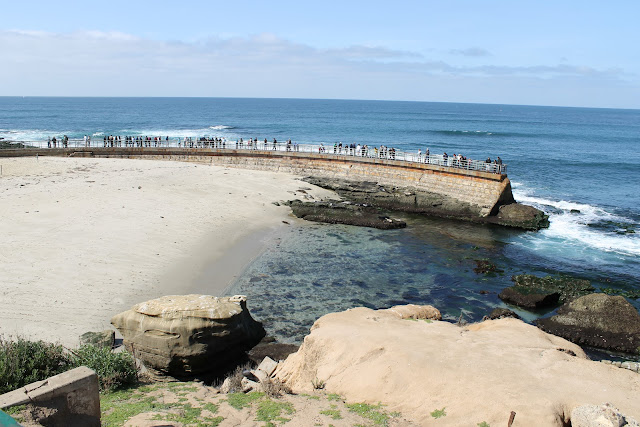 This little cove is called "Children's Beach."  For the past 15 - 20 years it's been taken over by the seals.  It's usually wall-to-wall seal, but this time
the moms were HAVING BABIES!!  So all the big seals are hanging out at another cove and all those little shadows in the water which are very hard to see are babies! 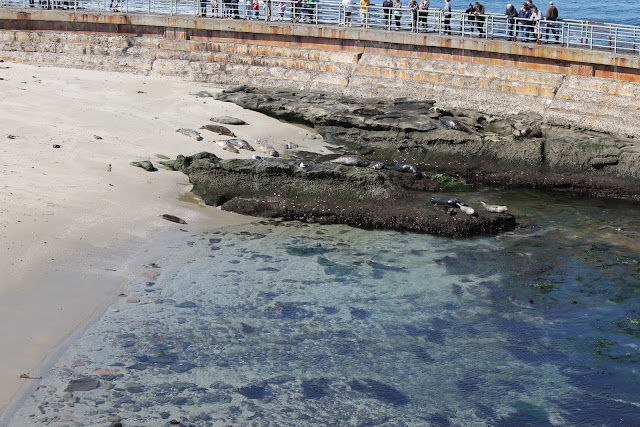 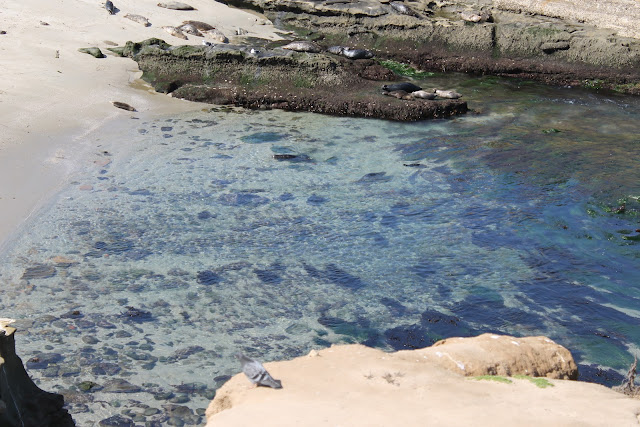 You can see moms and babies snoozing on the rock.
(We think the Publicist needs another lens for her camera.  Just sayin'.) 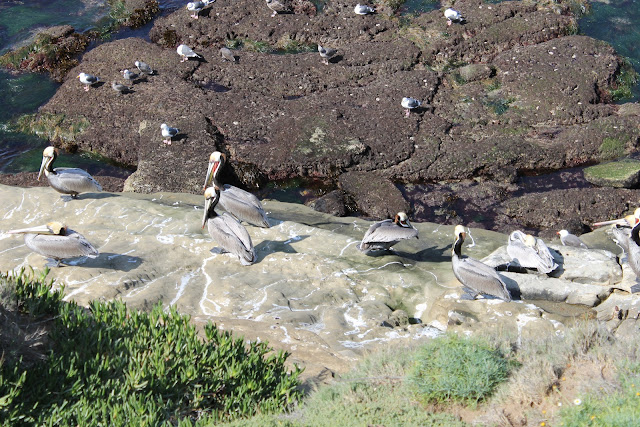 The other cool thing she saw were pelicans.  When she was in college in San Diego in the 70's the pelicans were almost extinct because of DDT.  Well, not any more!!  They are SO beautiful! 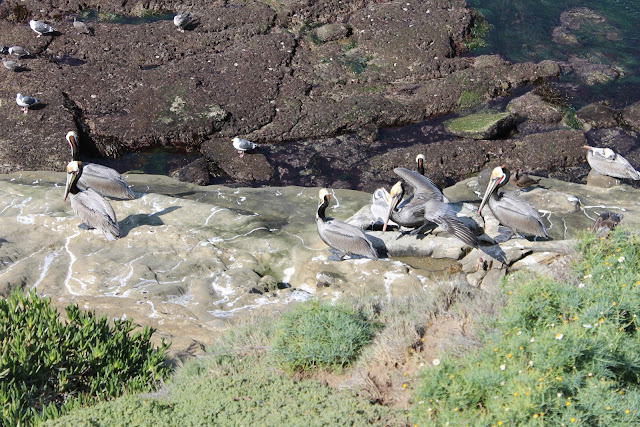 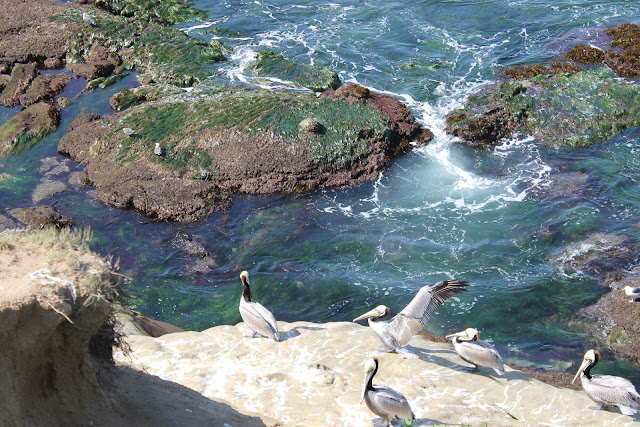 
This is what we did the whole time she was gone: 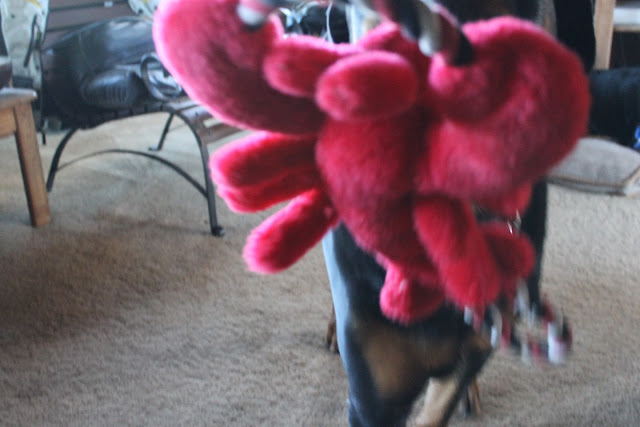 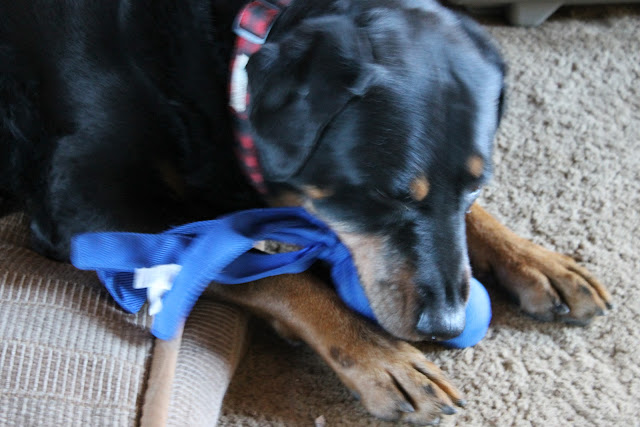 Hopefully you and your mom both had a great time, even if you weren't together! Those seal babies are adorable. I'm betting there was a lot of squeeing going on!

Thank goodness for the commentary! That looks like a terrific place to visit. Yes, The Publicist needs a new camera/lens, just like My Typist. Please get her one soon. Am I detecting that you like your daddy a lot (just like me)?

I'd wish you a happy leap year but it's already March 1. Happy Spring, Bart and Ruby! :) x

Those seals are beautiful, and ooooh, the babies! And the pelicans just awesome. What a shame Bart and Ruby had to stay home. But I guess the beef jerky was some compensation.

Does the publicist know what sort of seals they were? (The ones we posted about earlier this week were grey seals. Yes we know, they were not all grey. But then the other seal seen in the UK is the 'common' seal but it is much rarer than the grey. Something wrong with the seal naming system methinks!)

Wonderful photos! Seems like you had a great day, too! Beef jerky is YUM!

The pictures are awesome!

The place looks so interesting and beautiful. Those seals are so cute. We have to go to the zoo to see the seals as they don't live here but those seals are skinny and dull. I think the water isn't right for them here : )

Glad that you had a good time with your dad; beef jerky is terrific!

How nice to see the beauty of the water, the seals and the little kid seals!

Your Mom was a lucky traveler to see those things!

Today we are seeing snow, snow and more snow!

Oh my god I LOVE seals! They're so sweet, they look like dogs who are really happy and putting their ears back. Gorgeous place, thanks for showing us!

I loved having the video play while looking at the pictures! Those seals are so cute! But I bet they are a little smelly....and loud!

My G-daughter is in LA and she is the first one to go so far away from home!!!! Our home is in Florida and you can't get farther then that!!!! LOL
Beautiful pictures!!!

Awesome shots! Thank you for sharing!

Very cool pictures. We saw seals when we were in Alaska. (We needed a better lens too :)).

Great photo's.... the seals and the pelican's are wonderful to see. Thanks for sharing them with us.
Dad and beef jerky doesn't sound too bad!LOL
Big Nose Pokes
The Thugletsx

I (Frankie Furter) think your mom takes better pictures of Seals that they do on the nature channel.

Glad that your dad was there to slip you some delicious jerky!!!

Those pics are amazing. The water sure is blue. We just don't see that around here! :o(

Hi Bart and Ruby! Those seals are soooo cute!

Great pics!! Thanks for sharing them!

The Black and Tans. said...

Lovely photos of La Jolla. Our hooman has been there several times and loves it, she is feeling very evious at the moment so we have told her to look at your fab photos again.

Wowie, that is GORGEOUS there! Those seals woz quiet, tho, and the peeples was loud in your moovie. When mom woz ofur on that side of the You Ess Aye many, many, years ago, the seals she seened were CRAZY LOUD! Mebbe they did not want to wake up the babies. Shhhh. Good thing you had your dad to take care of you with eggstra noms and all.

So cool! So many seals!

We need a better camera, too, but how exciting to see seals. Those pelicans are a different colour than ours.

Glad to hear Dad didn't abandon you to see the awfully cute seals! And glad you got some beef jerky!

Mom did get some awesome pictures of the seals though, even with her crappy camera lens! :) What a neat sight to be able to see in nature and not a Zoo or Aquarium! Fun.

What a fun trip for your mom! The seals are so cute!
My mom sees pelicans when she goes to FL and they are big birdies!

So does that mean that, if we send Mom away, and Dad stays with us, we can get beef jerky too? BOL

great trip and great pics. That must have been so much fun to see.

Beautiful pics. Looks like you guys had fun at home too!

STELLA and RORY from Down Under said...

Wow whee, great photos. The seals are amazing and we love pelicans too. Seems appropriate that it is called "Children's Beach" and there are baby seals there. Thanks for sharing. No worries, and love, Stella and Rory P.S. Glad your Dad spoilt you.

Can you tell that I'm jealous?

Oh my gosh,, we love sea life- the seals and their babies, and those pellicans! We can almost smell the salty air after reading these words.
What a wonderful trip and amazing photos! Thank you so much for sharing.
love
tweedles

Sigh ...you know my assistant has a thing for seals, whales, dolphins, and other sea animals. She was going all crazy over these pictures! Cause, well you know, they don't have these creatures in Lake Michigan!

We actually did find a lost (we assume) pelican one cold night at a beach in Chicago. He was injured and confused and a wildlife person came out and rescued him.

Thanks for sharing these pictures!

Glad Dad took care of you well while mom was out having an incredible nature experience. Bigest question: Did she bring you back anything yummy or chewy or playable (or all three)?

Beautiful pictures - and what lovely seals and pelicans! Not sure I want to think about babies too much right now - plenty of time for that in the next few weeks. Glad you had a good time too while your Mum was away - woofs & licks from Magic xx

oh you were in my home! i miss la jolla...one of my fave things to do as a kid was the cove....going down all those steps...my parents..not so much lol! what, no jerky?!

Oh that looks fantastic. Hope you're making the most of the chance to make Mum feel guilty! Deccy x

Wow! Your Momma got to see some beautiful seals and their babies! But beefy jerky from Dad, proves Dad's rock!!

Smile With Your Tail said...

Dante says that is what happens to us dogs if we stay in the water too long, is she right?!

Your mom took some wonderful pictures. I just love to see those seals. And the babies!. Glad you were able to keep yourselves amused while she was gone. And Thank Dog for Beef Jerky! Ann TBL

What a lovely place, that "Children's Beach"! When we lived in Maine, we never got a chance to see the seals, which I regret...maybe one day.

It's a good thing that Dad stayed home to give you all those yummies and let you play and zoom!

Y'all had a better time than she did!! ROFL!

When I was growing up, there were actual children in that cove (ie. me!) although we preferred to go just a bit further down that road where parking was more plentiful and people were fewer. Spent many a lazy summer's day in that general area. Happy memories. :)

Great pictures! We just love seals...sooo cute, now we want to go to the beach!

You guys have such a good Dad!!! If Mom went away Zoie would get feed and put out and that is all!!!! You were lucky you got to stay home with your Dad!!

So very cool...seals galore...my Dads remember seeing seals and pelicans decades ago near Monterry when they headed west young men headed west! Yes they are big and ornery...some are! Glad you got your chewy to chewy!

hello rottrover its dennis the vizsla dog hay mama and dada stop by the childrens cove frum time to time to see the seels they say seels ar almost as cranky as tucker but i dont beleev that is eeven possibul!!! ha ha ok bye

Sigh. We're playing catch up again – but I'm enjoying reading all your posts that I've missed!

what a fantastic adventure for your publicist! Amazing pictures – can't believe how close you could get to those seals. And how nice that you are able to see them do all different things – from playing in the surf to sleeping and stuff. Lucky publicist! :-) Thank you very much for sharing the great photos with us! 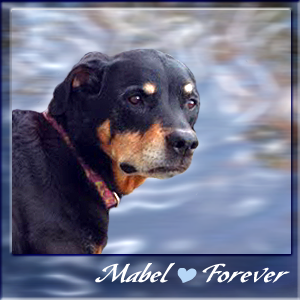 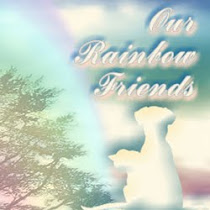 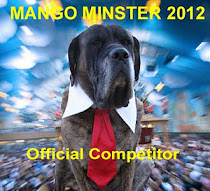 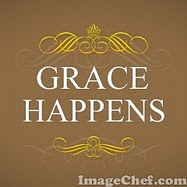 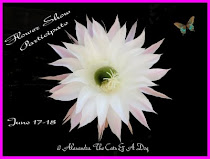 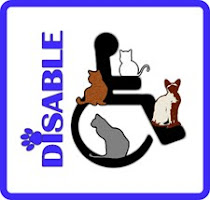 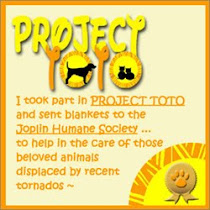 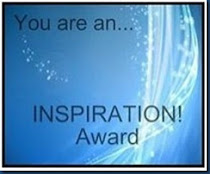 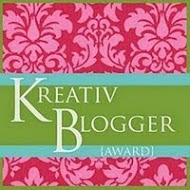 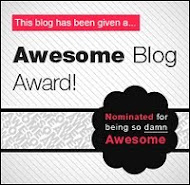 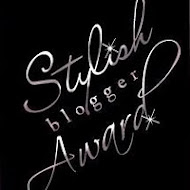